I had had the “let’s get married” talk twice before Matt. At least one of those guys even had the ring and I know both had a plan for the proposal. Both of those guys were wonderful guys, each with their own reasons for not choosing to marry me in the end. Which, in retrospect, has worked out just fine. However, in the moment, those were some very serious heartbreaks for me. Those, plus a few other, smaller dating heartbreaks left me fairly gun-shy when it came to dating, but I also knew that finding a companion and starting a family was the one thing I wanted most in life. So, despite my fears, I worked pretty hard to find dating opportunities that could lead me to what I wanted.

After my “dumpster experience“, I tried to be more open minded about who I showed interest in dating. I went on dates with some awesome short guys, younger guys, and one particularly great guy whose style was… well, he really needed new jeans. Being more open minded helped me to have more dating opportunities. For a few years before I met Matt, I had some really great and some really tough dating experiences. After a particularly great first date with a guy in my ward, I remember standing just inside my front door and thinking “This is what it’s supposed to feel like. This is how it feels when you’re genuinely interested and he’s genuinely returning that interest.” Not that that hadn’t happened before, but never that easy. Things faded with that guy, and faded with other guys, and faded with more guys. But I kept a little bit of hope that maybe I could find more of “this is what it’s supposed to feel like.”

At some point in all of this, a friend introduced me to Tinder. I played around with it for a day or two, decided it wasn’t really for me and forgot about it for a while. Then, in the midst of a particularly rocky relationship, the guy I was dating said he felt like we should date other people. So, because I didn’t agree, I decided to download Tinder and date other people I met online as if that would hurt his feelings or something. I went on one Tinder “spite date” and gave up on that idea for a while again.

Months later, I was feeling particularly single and I decided to give Tinder another shot because at least it felt remotely “productive”. I bounced on and off of Tinder, occasionally deleting it because it was just providing all kinds of awkward moments for me and I seemed to be only talking to guys who were nice, but not really who I wanted to date. Finally, I reached a point where I didn’t want to date any of the 20 some odd guys I’d matched with that go-around, decided Tinder wasn’t for me and I erased my bio, deleted my picture, and removed the app from my phone.

I kind of forgot about Tinder for a while until one Sunday when I had a conversation about online dating with my friend, Desiree. She told me that she’d met some incredible guys, that she found a lot of success in initiating the conversation, and just some other general things about online dating that gave me a lot more happy feelings than I had previously had. I hadn’t heard many people speak so positively about online dating – in fact, I had somewhat of an idea that online dating meant you were desperate. And even though Tinder was a bit more “mainstream”, I still wasn’t sure that that was how I wanted to meet my future eternal companion. (Cough, dumpster, cough.)

Shortly after that conversation with Desiree, I had the opportunity to watch this TED Talk: How I Hacked Online Dating. I watched it twice, actually. I was fascinated by the way she worked to present herself to really seek out the kind of person she was interested in. But ultimately, the way she talked about finding some who really matched what she was looking for and was also interested in her gave me hope. She was so confident about who she found. It didn’t matter where she found him or how, she was led to exactly what she wanted.

After a month of conversations like that and thoughts about that TED Talk, I got the feeling that maybe it was time to download Tinder again. So, three months after swearing off of Tinder forever, this happened:

read the first part of the prologue here

In 2013, James Taylor performed in Salt Lake City, Utah with the Mormon Tabernacle Choir. (Isn’t that how all good stories start? No? Too bad, it’s important.) I heart James Taylor, so naturally, I signed up for tickets. However, a week or two before the concert, something came up and I wasn’t able to go. So, I posted on Facebook to offer the tickets to anyone who could use them. My friend claimed them for she and her son to use and I was excited to share them with her.

My roommate, Janielle, used to always say “prayer works” – usually after a story of losing her keys or purse, but always very full of gratitude. So, as I stood there in my room mad about losing the tickets, I heard a little Janielle voice in my head say “prayer works” and, though I thought it might be dumb to pray to find tickets, I knelt down and decided I’d pray until I stopped feeling dumb about it. As I started to pray, I remembered that it was garbage day, but we’d forgotten to take our big garbage can out to the curb that morning. Which meant that if I’d thrown the tickets away, they’d still be out in the garbage bin somewhere.

I started to feel hopeful that that’s where they could be, but remembered that my neighbors were having a party in their back yard. I worried about what they would think of their neighbor dumpster diving at 11:00 PM on a Friday night. SO lame. “I really don’t want to look in the garbage can”, I prayed. And then a soft voice said “If I lead you to exactly what you’re looking for, does it matter where I send you to look?”

I was humbled and I agreed that I could look in the dumpster in front of my partying neighbors if that’s where I would find the tickets. Shortly after that, I opened my eyes and saw the tickets right on top of my bedroom garbage can (which I swear I looked through before). I said a prayer of gratitude and got the strong impression that I needed to compare this experience to dating.

So, I started learning how to let him guide me through my “dating dumpster”.

100 points to hufflepuff for this one. because proper credit should be given to the reason there’s a perma-smile on my face. #mcm #cheesy
A photo posted by Elise Frederickson (@eliseypants) on Mar 23, 2015 at 10:18pm PDT

thanks for being all kinds of cute and trying to one-up me in battles of who is nicer/cuter/etc.

my heart does magical firework-y things when you smile

and also when you tease me

and also all the time.

you’re my favorite everything. 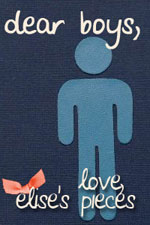 I’m Elise – a graphic designer, hand letterer, and font lover with a passion for creativity and empowering others to create.

Any cookies that may not be particularly necessary for the website to function and is used specifically to collect user personal data via analytics, ads, other embedded contents are termed as non-necessary cookies. It is mandatory to procure user consent prior to running these cookies on your website.